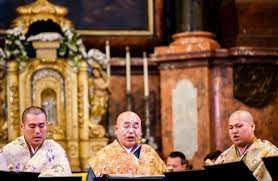 The artistic director of the Gyosan-ryū Tendai Shōmyō ensemble and phenomenal liturgist who initiated the liturgic singing meeting of Buddhist Shomyo songs Christian choir in Prague.

The artistic director of the Gyosan-ryū Tendai Shōmyō ensemble and phenomenal liturgist who carried out a drastic reorganization of the ensemble three years ago. It resulted in an incredibly harmonious sound that retains the earthy rawness, which is an inseparable element of Tedai ​​Shōmyō's songs. The first visit of the leaders of the Tendai Buddhist School in Prague in 1998 was the starting point for an attempt to connect the Kyoto and Prague traditions of liturgical singing. The extraordinary helpfulness and understanding of the priest Tomáš Halík enabled the historical meeting, during which and perhaps for the first time in our conditions, Buddhist Shomyo songs and liturgical meditation became part of Christian worship in the Church of St. Salvator in the Old Town Prague. This experience established long-term ties between the Japanese school Tendai with its central monastery Enryaku-ji on Mount Hiei and the Czech spiritual environment. The establishment of cooperation with David Eben and Schola Gregoriana Pragensis was another bold step, which resulted in the first performance of the two above-mentioned ensembles in the autumn of 2000 in the Church of All Saints in the Prague Castle. Indescribable and chilling experience of cosmic harmony, when ‘the heavens touched the earth and the earth trembled’, was etched in the memory of the present audience.